Norbert Llaràs, after graduating in Law, quit his job in a bank to become producer and partner in the production company Zip Films, where he produced films like “Alpha” (2012), “Memories of My Sad Whores “(2011), ”Fake Orgasm“ (2009), ”Dark Buenos Aires“ (2008), ”My Way“ (2007), ”The Anarchist’s Wife“ (2007), “The timecrimes” (2007) or “El taxista full“ (2006), TV movies as “Blank Bullets” (2010), “Implosion” (2010) or “El partit” (2006) and documentaries like “The Losers” (2007) or “Cuba sings to Serrat” (2005). Almost thirty productions present at festivals such as San Sebastian, Sitges, Locarno, Munich or Sundance and many of them produced along with the United States, Argentina, Uruguay, Germany, Denmark and Italy. Proud of his small country, Catalonia, Norbert considers Barcelona an open and seductive city – a stamp he wishes to impress on Alhena Production: a young, courageous and creative company. As a film producer, Norbert tries to find the balance between art and finances, dishing out resources and ideas accordingly.

Self-taught and cinephile since always, he started working making reports for local televisions and companies. A few years later he joined the staff of the prestigious distributor Lauren Films, his great learning film industry. At Lauren he had a multitask role, from media to advertising and marketing. When the distributor closed its doors, Andreu began a journey of collaborations with different producers, until he started working for Alhena up to mid-2016, where he is responsible for coordinating the production of their projects, since the shooting until the premiere. 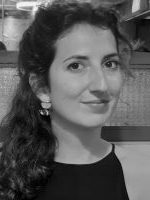 Eva Pauné graduated from Pompeu Fabra University (Barcelona) in Audiovisual Communication. After specialising in Screenwriting in Los Angeles, she joined the production company Alhena in 2013 as a script reader. Some years and some films later, now she manages the creative development of the new projects of the company and also takes an active part in the financing research – working in the ideas conceptualization and presentation of the projects to public and private institutions. She just completed her first short film as a writer and director, La mala fe, together with her sisters, Elena and Marina Pauné – which will start its route to festivals in 2018. At the present time, Eva is immersed in the process of researching and writing Each of Us, her first feature film as a writer, together with Mirjam Ziegler.

Once she finished her degree on audio-visual media at Tecnocampus de Mataró, she started her MoA on production and cinematographic distribution at Escola de Producció Audiovisual de Catalunya. During this time, she started working at Alhena where she did an internship focused on production. There, she did several chores, like monitorising festivals, writing subsidy applications and keeping up with social media.

She combines her last year of the Communication and Cultural Industries (UB) degree, with studies of Cinematography at the Barcelona Film School (ECIB). She has joined the Alhena team with great enthusiasm and desire to work. Her tasks are related to production, design and social media. She is using this period to learn and, above all, to get to know the world of cinema firsthand, so that she can decide how to approach her professional path. She has directed two music videos of her own and is currently working on her first short film.

Graduated in Interpretation at the National University of the Arts of Buenos Aires (UNA), she is currently attending the Postgraduate Fiction Screenplay for Film and TV at the Barcelona Film School (ECIB). She has performed in various short films selected at international festivals (BAFICI, Blood Window Pinamar) and has been selected to participate in the TALENTS Buenos Aires (BAFICI-BERLINALE-Goethe Institut) in 2015. She has also written and directed several plays. Emilia joined Alhena as a script analyst and is currently in charge of the valoration and development of new projects for the production company. She is also developing, as her final postgraduate piece, the script of her first series.